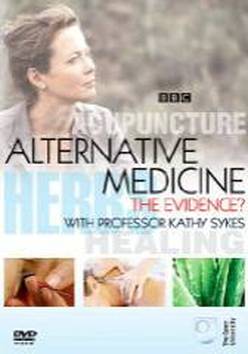 Tuesday's programme - the first of three on complementary medicine - will show researchers carrying out brain scans on people having acupuncture.

The BBC Two show will also feature heart surgery done using acupuncture instead of a general anaesthetic. The patient is conscious during the operation in China, but she was given sedatives and a local anaesthetic.


In Alternative Medicine: The Evidence, volunteers are subjected to deep needling, which involves needles being inserted 1cm into the back of the hand at well-known acupuncture points. A control group undergoes superficial needling with needles placed only 1mm in.

Sensation
The needles are then twiddled until the participants feel a dull, achy or tingling sensation. For those in the deep needling group this stimulates the nervous system. During these two procedures, the volunteers underwent brain scans to see what, if any, effect there was in the brain. The team, including leading scientists from University College London, Southampton University and the University of York, found the superficial needling resulted in activation of the motor areas of the cortex, a normal reaction to pain. But with deep needling, the limbic system, part of the pain matrix, is deactivated. The finding was surprising because experts had always assumed acupuncture activates the brain in someway.

Professor Sykes said: "The pain matrix is involved in the perception of pain - it helps someone decide whether something is painful or not, so it could be that acupuncture in some ways changes a person's pain perception. We have found something quite unexpected - that acupuncture is having a measurable effect on the human brain. We are not suggesting that it should be used during surgery, although it is in China, but just that it acts as a pain relief and should be taken seriously."

Professor Tony Wildsmith, a pain relief expert at the University of Dundee, said he thought the findings were possible. But he added: "The thing about acupuncture is that it does not work on everyone. It is more likely to be effective if you believe it. I think it is a psychological manipulation technique, a distraction. We are not going to get to the stage where this could be used instead of a general anaesthetic." 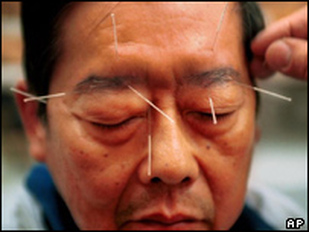 Acupuncture caused brain activity over and above a simple skin prick 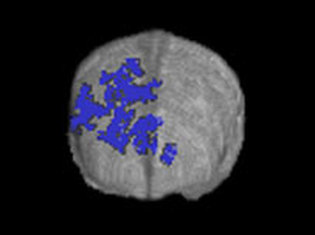 Scan showing area of the brain deactivated by acupuncture